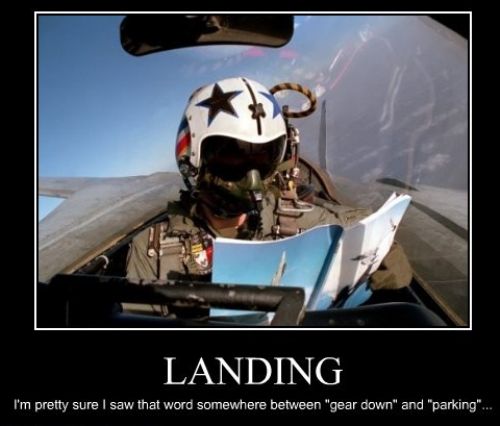 I have noticed a tendency lately in students which is all too common. They are so relieved at getting the airplane on the ground in one piece that they relax after touchdown. They let go of the stick and forget they have feet.

In fact, THE TIME JUST AFTER TOUCHDOWN IS THE MOST CRITICAL PART OF THE LANDING.

For one thing, the airplane is still travelling at some 70 kts. Nobody in their right mind would take their hands off the steering wheel and the pedals of a car travelling that speed. Why do it in an airplane? At least a car would track in a straight line by itself, but not a tail dragging motor glider.

Why is this so? It has to do with the location of the landing gear in relation to the Centre of Gravity. Tail draggers have their centre of gravity BEHIND the wheel (or wheels in the case of YHB). The plane is directionally unstable. It WANTS to turn with every bump or slight bit of turbulence. Not only does it want to turn, the turn rapidly builds up momentum, resulting in the notorious ground loop.

While rudders in the air are mostly used to counteract aileron yaw, on the ground they are ESSENTIAL. Pilots must make this transition immediately on touchdown. Every deviation from a straight line has to be fought instantaneously with increasingly forceful movements of the rudder as the airspeed bleeds off.

A steerable tail wheel is some help but is no substitute for quick action. The most successful tail dragger pilots actually develop a feel for a potential swing and make corrections before it starts. I had to do this to avoid problems in my Cessna 180 (aptly dubbed the “Widow maker” for its notorious ground looping tendencies.) In the old days, all small aircraft were tail draggers.

Tricycle landing gears (with their weight and drag penalties) came about when Piper and Cessna wanted to sell more airplanes to doctors and lawyers in the US. ANYBODY can land a tricycle-geared aircraft because it tracks right down the runway by itself. It is directionally stable due to the CG being in FRONT of the main gear. Cessna drivers take hours to learn how to use their feet in a tail dragger. Learning to fly in a tail dragger has a distinct advantage. Converting to tricycle gear is easy, like going from a manual shift to an automatic. Going the other way is like going from an automatic to a manual. You have to use FEET.

BOTTOM LINE: KEEP FIRM CONTROL OF THE AIRPLANE UNTIL YOU OPEN THE CANOPY AND GET OUT.

Hands also play an important part in landing as is well known.

Even so, there is the same tendency to let go, or at least relax, the stick after landing. The aircraft just after touchdown is still going fast enough for the elevator and ailerons to exert control. The ailerons must be used to keep the wings level, just as in flight. This applies even when taxiing.

An airplane is a flying machine until it is tied down or in a hangar. A discussion about the use of the elevator has to start when the aircraft is on approach.

Approach speed is controlled by the elevator. The approach speed is nominally 1.5 times the stalling speed. In calm conditions in the Motorfalke, this is about 52 knots.

Increased wind speeds require increased approach speeds. Why? There are a number of reasons. For one thing, if the wind was blowing 52 knots, and the approach speed was 52 knots, the aircraft would have a ground speed of 0 and would never reach the airstrip. (Although it could land vertically like a helicopter.)

In strong winds, glider pilots must reach a compromise between penetration into the wind and the increased rate of descent caused by increasing the airspeed. (Cessna drivers just add power.) A Motorfalke has the L/D of a pair of pliers at 70 knots. Another reason for increasing the speed is the turbulence caused by strong winds flowing over trees and hills. Gusts and attendant lulls can cause a stall at low altitude as the airspeed suddenly decreases.

Increased speed also gives more control authority, especially for ailerons in the case of sudden wing drops. Wallowing along just above stalling speed in a strong wind near the ground is not a good practice. Strong winds also are accompanied by wind shear. The wind aloft is blowing faster than wind at the runway surface. This can cause an aircraft to stall as it descends into the slower moving air which has the effect of suddenly reducing the airspeed. I encountered just such a situation recently on a ‘Joy’ flight in GLC. A strong northerly was blowing. The wind shear was immediately apparent as soon as we left the ground. The turbulence was nasty near the ground, but not so bad aloft. We cruised the ridge for a while at 1,200 feet and headed back for the field. I made my turn onto base just west of the freeway at 70 knots airspeed. I had lots of money in the bank with good altitude and speed. I crossed the freeway at about 300 feet and pulled on airbrake. The turbulence was severe. I held my speed, reduced airbrake to half and descended through the shear into the smooth, slower moving air near the ground. As soon as I touched down, I pulled on full airbrake and had the stick in my lap.

Full airbrake and stick full back are insurance against the airplane leaping off the ground again. Full stall landings in tail draggers are best accomplished with the main wheel (wheels) and the tail wheel hitting the ground at the same time. Knowing what this attitude looks like from the cockpit is essential and should be practiced when taxiing or any time the airplane is on the ground.

If the tail wheel is not on the ground during a full stall landing, the tail will drop, the angle of attack will increase and the aircraft will hop 2 meters above the ground with not enough airspeed to keep flying. Ouch. Maybe expensive. Stick full back keeps the tail on the ground. (Stick should be full back on taxiing, too, except in a strong tail wind when it should be full forward. Figure it out.) The use of full airbrakes AFTER touchdown also keeps the airplane on the ground. Deploying full airbrakes before touchdown is not a good idea. The Motorfalke will tolerate it, to some extent, but some high performance gliders with effective airbrakes have difficulty rounding out with full brake and just keep dropping onto the runway without a flare. NEVER start a sideslip and then add full airbrakes at low altitude in a Motorfalke. The aircraft drops its nose and heads for the ground. This caused a fatal accident recently at Watts Bridge.

Just like for FEET, the bottom line is to keep HANDS on the controls and busy at all times. The flight’s not over until it’s over!