Q. … Incidentally, are you aware of any specific results of GRP gliders being struck by lightning? Everyone mentions the English event where the beast became briefly biplanar as the water in the ballast bags superheated and expanded, but I gather that is rare. Presumably it wouldn’t be good for the instruments, but I note that Alice [an LS4] has metal straps to form an electrical continuum in the event of Huey hitting the ‘smite’ key. I gather the average instructor feels that being struck by lightning is an unfortunate event for a glider, but do you know of definite structural problems that have resulted? 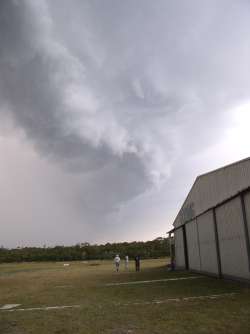 A. I flew through a thunderstorm once, when I was younger and more heroic – it was quite frightening, I assure you, with bolts of lightning zapping down to left and right. Having achieved my goal (2nd turnpoint, after a 300′ save rounding the first) I then showed incredible stoicism and flew back through it, penetrating through off-the-clock sink to get back in front of the stormgust which I then flew to the third turnpoint near Bogan Gate and most of the way home, landing just in time for the squall line to hit the Forbes strip.

Subsequently I read a little of the effects of lightning on aeroplanes, and remained convinced for many years that a strike, although frightening and detrimental to avionics, would have no effect on the structure or the occupant/s.

Not so, I later discovered. Firstly, GRP sailplanes (and most others) do not have the little metal strips on the trailing edges of their wings which you will find on GA aircraft. These strips do the same job as the earthstraps you used to see on cars years ago – they dispel static charges. Without them, the bolt will exit through the path of least resistance, often via the aileron and rudder hinges – welding them solid in the process (hence the doodads Gary attached to Alice).*

So you’re belting along near Vne, trying to stay out of the cloud a handspan above the canopy which same is now largely opaque due to the copious quantity of water bucketing down on it, bolts from the blue crackling about your wingtips like The Mariner’s worst nightmare of St Elmo’s Fire, and suddenly the controls freeze. You think about this for a moment. Perhaps three milliseconds.

Kaboom! Struth, that was close. BANG. Glancing to your left, you are presented with an unimpeded if somewhat murky view of the world some 10,000 feet below. This is something of a worry considering that there was a nice shiny white wing there last time you looked.

Fibreglass gelcoat, as it becomes older, will often become porous and admit minute quantities of water into the structure. Lightning superheats this water instantaneously, causing anything from minor delamination to structural failure.

And you’re quite right, it’s very rare. When was the last time you saw some idiot flying in a thunderstorm?

P.S. But there is NOTHING like the buzz of riding a storm front!

Ian Bennning of Sunraysia Gliding Club, who sent the ASK21 reference above, also mentioned that “lightning struck our IS28 a few years ago while it was on wire launch, no damage or injuries.”

Graeme Cooper was the passenger in the aircraft who parachuted to safety. He writes a harrowing account of the event here:
http://www.justgiving.com/big40reachfortheskiesagain
He also requests that visitors donate a little to the Parkinson’s Disease Society.

I have recently complied a ‘scrapbook’ of the days events of 1999 that has some photos of the actual wreckage and shots taken during the reconstructions for TV that you may find interesting.

Further reading: A Stranger to the Ground – Richard Bach.

One Response to Lightning Strikes