We all have to be conscious of how and where we fly when near the ground.  The local populace becomes quite concerned about low flying aircraft.  People are more sensitive than usual due to the use of the area as a training area by Gold Coast flying schools.  After writing a series of letters to the local papers, I have more or less convinced residents that we are not the ones causing the problems.  This is a good thing, because the flying schools are regularly reported to CASA.  Australian Wings Academy has actually received death threats from irate Mullumbimby residents.

As you all may have noted, our aircraft have BYRON GLIDING.COM in very large, readable letters under the wings.  It is pretty hard to convince people that we are from the Gold Coast.

It is legal to fly over “un built up” areas at 500 feet.  This is fine out west of Tenterfield someplace, but attracts a lot of attention in the Mullum area even though it is within regulations.  CASA requires 1000 feet above “built up” areas.  (i.e. towns) It would be good practice to consider the entire region a built up area to avoid complaints.

The ridge is a special case and officially has lower limits.  However, out of consideration for the residents, the entire ridge should be flown no lower than 700 feet msl.  There is a critically sensitive area 1.2 nm west of the Pacific Highway.  This is easily identified by the chicken sheds on Myocum road and the large new house with the solar panels up the ridge.  (See attached photo) Stay well clear! 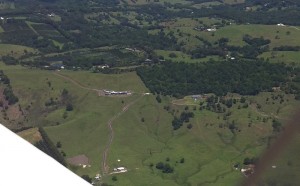