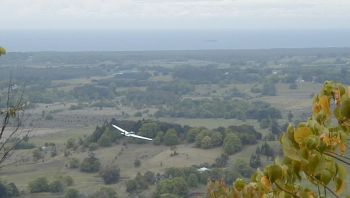 Sixty years ago the Coorabel was the site of an historic record breaking flight, when intrepid aviator Ted Parr cracked the magic 5 hour mark in his primary glider, Pegasus. Aboard as passenger was Gordon Coles of Coorabel, aged 12.

Gliding has come quite a way since those early days, and a new solo pilot is required to make a 5 hour flight as part of the training sylabus.

A sailplane soaring Mt Warning, within glide of the Coorabel
Ridge